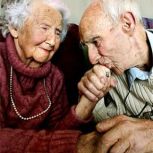 ‘The human heart, at whatever age, opens to the heart that opens in return’

Romantic love has been described as ‘a human universal, or near universal’ and is associated with intense emotional experiences such as increased energy, euphoria, obsessive thinking about the loved one, feelings of dependency and craving. When people are ‘in love’ they may feel as if they have uncovered the meaning of life. People often report feeling complete and that their life feels whole. Bronte superbly captured the experience in Wuthering Heights: ‘‘I am Heathcliff – he’s always, always in my mind – not as a pleasure, any more than I am always a pleasure to myself – but, as my own being.”

The arts continue to be consumed by efforts to describe and understand romantic love. The book by Gabriel García Márquez, Love in the Time of Cholera, is but one example of a story illustrating the power of enduring love, where a couple fall in love in their youth, go their separate ways during midlife and return to one another’s arms in their old age.

Previous research by Tucker and Aaron (1993) suggests that marital satisfaction is typically reported as highest in new marriages, lowering during midlife and improving later in life. The peaks and troughs of relationship satisfaction map onto different life stages. For example, midlife is considered a particularly stressful period for couples due to commitments such as work, child care, financial stresses and caring for older relatives. However, older adulthood is not without its challenges, with older adults facing transitions such as retirement, an empty nest and potential declines in health status.

Notably, honesty was the most fundamental element of relationship success in the collective intelligence structural model developed by the older adult group. Honesty was not identified as an element of relationship success by the younger adult group. Older adults defined Honesty as being ‘able to confide in one another in a truthful way’. Honesty is an interesting concept as it involves self disclosure and risks putting an individual in a vulnerable position, and yet the ability to disclose honestly in a mindful, trusting and sensitive fashion can facilitate a deeper level of intimacy in the relationship. Furthermore, research has suggested that self acceptance increases with age and that with age, people have a stronger sense of their true self and less of a discrepancy between ‘real’ and ‘ideal’ selves. It is possible that the older adult group in Kate’s study were able to draw on their broad experience and have come to recognise honesty as critical to the long-term success of romantic relationships. In contrast, younger participants valued Trust and Communication as fundamental drivers of relationship success.  Younger adults defined trust as being ‘able to rely on and be supportive of one another’ and ‘to be faithful to one another’.

Interestingly, older adults also selected Religion as one of the key elements of successful romantic relationships. They believed that sharing religious beliefs and attending church together provided a foundation for a successful relationship. This element was not identified as important by the younger adult group. Notably, there have been significant changes in recent years in levels of institutionalised religious practice in the largely Catholic Irish population. Weekly mass attendance declined to 50% in 2003 from 90% in the 1970’s. This may account for this significant difference between older and younger groups.

Socialising was also highlighted as an important factor by the older adults.  During the group session, older adults highlighted that socialising encapsulated going out as a couple but also individually. During later life, ones social network may reduce in size but within this context older adults often enjoy increased frequency of socialising with friends and neighbours, and this pattern of increased socialising may facilitate romantic relationships as it stimulates intimacy and communication amongst older lovers.

Younger adults emphasised the importance of Attraction and Compatibility whereas older adults emphasised Socialising, Trust and Respect. These findings fit well with what we know about the development of romantic relationships. In Western societies, feelings of passion and desire associated with the early stages of a relationship often evolve and transform into feelings of compassionate, committed, and friendship-based love in later life. Older adults may thus drop elements such as attraction from their representations of romantic relationship success as they develop a more mature understanding of relationship success over time.

We are living in a time of significant demographic change. According to statistics from the UN, the population of older people has trebled since 1950 and is due to treble again within the next forty years or so. Given that successful romantic relationships carry significant benefits for physical and mental health, understanding how successful romantic relationships can be established and maintained could have significant benefits for an aging population. Further research in this area could also inform couples therapy and a new lifespan theory of relationships success. John Gottman and colleagues has conducted outstanding work in this area and has worked to apply his research in the context of clinical that attempts to help couples who are having relationship difficulties. Kate Burke’s ongoing research intends to continue this line of investigation and application by focusing more attention on the largely neglected perspectives and vast experiences of older adults.

We believe that ongoing research in this area will build on previous findings and provide some new insights into the nature of loving relationships in younger and older adults.

A new survey study that builds upon Kate’s collective intelligence work is available below and should only take people half an hour to fill out. Kate specifically wants to examine the importance of romantic relationships for people over 60 years-old. She has created a questionnaire and ideally needs around 200 people to participate. Apart from being over 60, participants should also either be in a romantic relationship or have been in a relationship within the last 10 years.

Those who wish to participate in the online study should log onto: https://www.surveymonkey.com/s/MBNJ9CL

Participants can also complete the survey in paper format by contacting Kate at kateburke85@gmail.com. More information can be found on the homepage of the NUIG website at www.nuigalway.ie. All participants’ data will be kept confidential with no identifying information attached to the questionnaires.

Originally published Feb 11, 2013 in ‘In One Lifespan’ @ PsychologyToday.com