At the same time, the development of metacognitive skills is a gradual and uncertain process that is contingent upon the quality of education and training children and adults receive. For those of us who have received a science education, or who are immersed in acts of inquiry as part of our work, we may take for granted the curious nature of metacognitive acts and not seek to modify educational practices. We may assume that metacognitive action is a cultural given – a commonplace and everyday activity. Congruent with Jean Piaget’s theory of cognitive development, we may assume that the development of critical, reflective and collaborative metacognitive thinking skills in adolescence and adulthood is an inevitable product of an orderly, cumulative, directional sequence of change – a movement from reflexes, simple representations and intuitive logic toward increasingly logical and adaptive representations of reality. Not only is this view fundamentally false, culturally bounded, and idealistic, it distracts us, with its wonderful simplicity, from the complexity of metacognitive skill development and the educational challenges associated with cultivating these skills.

Understanding and influencing metacognitive skill development is essential for further cultural evolution, and ultimately, our survival, adaptation and flourishing as a species. Due to what can be considered an exponential increase in the creation of new information every year, higher-order, metacognitive skills are needed more than ever in order to aid individuals and groups in becoming more adaptable, flexible and better able to cope in the context of a rapidly evolving information society (Darling-Hammond, 2008; Jukes and McCain, 2002). It is widely recognized that the challenge of education implies more than a focus on developing domain-specific knowledge – also needed is metacognitive knowledge and skill, and approaches to enquiry that allow children and adults to approach problems, solutions, experiments, explanations, and simulated actions with a mindful, reflective, collaborative sensibility that facilitates adaptive action at individual and group levels.

If you are involved in education, you may have often wondered what it means for students to think critically, how best to teach critical thinking skills, and whether or not students are actually receiving much support in the development of these skills. These issues are not new: for example, in a survey conducted by the University of Western Australia (2007), it was found that while 92% of academic staff believed it was important to provide students with opportunities to critically evaluate their own beliefs and perspectives with a view towards changing them, 54% of students felt that they were not actually provided such opportunities by their lecturers and tutors.

As such, Critical thinking (CT) is important, but how should we define it?  CT is commonly defined as a metacognitive process, consisting of a number of sub-skills (e.g., analysis, evaluation, and inference) and dispositions (e.g., trustful of reason, willing to change one’s position), that, when used appropriately, increases the chances of producing a logical solution to a problem or a valid conclusion to an argument (Dwyer, 2011; Dwyer, Hogan & Stewart, 2014). Most definitions of CT, and most interventions designed to increase CT, are grounded in academic or expert definitions of CT skills. Students are rarely, if ever, asked to guide their instruction by describing their perspectives on what constitutes CT. One way to challenge this norm is to engage students directly in the design of their own curriculum. In this context, teachers and instructors facilitate learning by providing scaffolding that supports students self-selected learning goals. While learning with scaffolding has been described as being similar to an apprenticeship (Rogoff 1998), perhaps a partnership between teacher and learner is a more appropriate description. As in any successful partnership, negotiation is often required. As such, the idea of ‘negotiating the curriculum’ has been proposed as having significant advantages over traditional means of curriculum development (Boomer 1992). According to Boomer (1992, p. 13), ‘‘if teachers set out to teach according to a planned curriculum, without engaging the interests of the students, the quality of learning will suffer. Student interest involves student investment and personal commitment. Negotiating the curriculum means deliberately planning to invite students to contribute to, and to modify, the educational program, so that they will have a real investment both in the learning journey and in the outcomes’’ (Wood et al. 2002, p. 279).

We believe that this is an important philosophical starting point for the design of the curriculum, but we are acutely aware that we don’t often know what students think and we don’t necessarily know how best to gain valid insight in relation to their system of beliefs.  We wanted to find out what our students envision as the key components and system of interdependencies between components of good critical thinking (CT). We reasoned that if can better understand the components of CT that student’s value and how these CT components work together as part of an ‘enhancement system’, then we would have a rich basis for negotiating a new CT curriculum.

Therefore, we recently conducted a case study investigated students’ conceptualisations of what constitutes ‘good critical thinking’ using a collective intelligence methodology, interactive management. Interactive management (IM) is a computer-assisted process that allows a group to build a structural model describing relations between elements in a system. A fundamental skill for making decisions and solving problems is the ability to collectively visualise the structure of a shared problem, and use this knowledge to design solutions and strategies for collective action. The IM method has a long history of successful applications (Hogan, Broome, and Harney, 2014) and is well suited to the problem of developing a student-centered model of CT.

So what did the students in our study envision as a systems-based model of good critical thinking?  The student discussion was fascinating — students clearly highlighted five core CT skills (clarity of expression, conversational skill, inference, evaluation, and explanation), five CT dispositions (detachment, listening, systematicity, recognising uncertainty, and self-questioning) and fourteen structural relationships among them. A structural map was generated based on the deliberation and voting that took place during the collective intelligence structuring session (see Figure 1). The structural model generated by the group is to be read from left to right and the arrows indicate ‘significantly enhances’. For example, reading the structure from left to right, a set of 3 CT skills and dispositions can be seen to significantly enhance a total of seven additional skills and dispositions. Specifically, the dispositions: ‘‘the willingness to detach from one’s own beliefs’’ and ‘‘the willingness to listen’’ and the CT skill of being able ‘‘to converse and engage with others to expound personal views and experience’’ are described as the most fundamental drivers of other CT skills and dispositions. A full discussion and interpretation of results is provided within the manuscript. 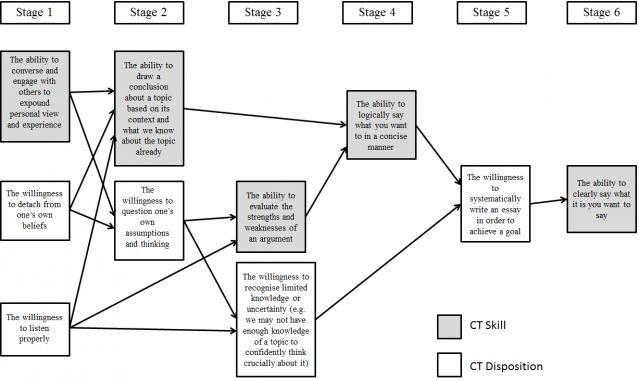 The results imply that given the international movement towards engaging students’ learning goals and outcomes; actively engaging students in defining learning outcomes; and mapping these learning outcomes and implementing action strategies that are consistent with students’ goals (Hake 1998; Hogan 2006; Mayer 2004; Redish et al. 1997), it becomes important to encourage a student–teacher partnership in which student-centred conceptualisations of CT may be incorporated into instruction, fostered, explored and applied. The methodology employed in this study to metacognitively build on preconceptions of CT may have some affordances in providing both a cognitive and psychological scaffold for instructors and students alike. The approach may provide educators with a better understanding of the CT skills and dispositions towards thinking that students most value—thus, allowing educators the opportunity to facilitate both students’ CT ability and their willingness to apply CT outside of the classroom context. We plan on using this collective intelligence approach as a point of departure for negotiating the curriculum with our students in the future.

Originally published Oct 31, 2014 in ‘In One Lifespan’ @ PsychologyToday.com

Mayer, R. E. (2004). Should there be a three-strikes rule against pure discovery learning? The case for guided methods of instruction. American Psychologist, 59(1), 14–19.

Wood, P., Kitchener, K., & Jensen, L. (2002). Considerations in the design and evaluation of a paper-and-pencil measure of epistemic cognition. Personal epistemology: The psychology of beliefs about knowledge and knowing, 1, 277–294.