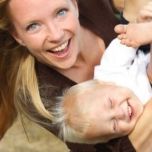 Anthropological studies of traditional African and Asian societies often describe group interaction with babies, specifically, passing around of the baby to all group members in a warm, playful, rhythmic pattern of “touching dance”. For example, tribes such as the Nso of Cameroon provide a great deal of body stimulation by consistently rocking and lifting the baby up and down while making eye contact. In contrast, it is sometimes noted that Western cultures place a stronger emphasis on autonomy and the capacity to self-regulate arousal and emotion, with parents often advised to avoid too much physical contact such that babies learn to self-regulate. Interestingly, it has been shown that children from more traditional cultures tend to sit and walk sooner than their peers from the West (Adolph & Berger, 2006). Furthermore, as time goes on, the use of smartphones and tablets is becoming ubiquitous in Western culture, possibly furthering the physical and social-emotional divide. Young infants demonstrate a particular fondness for these devices, for example, with cartoons and games and interactive experiences offering a way to sooth emotions – and when this is the only thing that can calm your wailing three year old, any disadvantages may be quickly outweighed by the immediate benefit in the mind of the overburdened carer. In Dancing with Your BABY: For Bonding and Better Health for Both of You, Sue Doherty provides an alternative to the Web 2.0 approach to child development. Doherty promotes deeply immersive and stimulating physical engagement between baby and carer and the incorporation of various poses and “carriages” into dynamic, multisensory dance routines for the purpose of bonding with your child and facilitating their cognitive, social and sensorimotor development. Doherty provides a convincing synthesis of current scientific evidence, common sense and an anecdotal flare that provides not only an interesting read but also a thoroughly useful and practical guide for any parent or caregiver.

Doherty uses the term “Kinergetics” to describe a form of dance and movement whereby the caregiver lifts, holds and cradles their baby while performing an aerobic exercise or dance routine to music of their choice. This form of interactive dance provides a “high-quality, age appropriate, play experience” for your toddler, as well as a form of exercise and stress relief for the caregiver.  Here is a lovely video demonstrating the type of dance that one might perform.

Doherty presents scientific research on the neural, sensorimotor and psychosocial development of children to highlight the ways in which this type of dance can facilitate your baby’s cognitive and emotional awareness of self and environment. She highlights that close personal contact and touch are absolutely necessary to the performance of these routines. Doherty notes that touch is vital in providing validation to your child, aiding development of secure attachments, reducing distress and facilitating positive emotion and a desire to interact with other people and the environment.  In a study conducted by Jahromi and colleagues (2004), it was found that mothers who used a combination of rocking, holding and vocalizing were most successful at soothing their babies’ distress after painful vaccinations at two and six months of age. According to Doherty, dancing with your baby in an environment of reduced stress helps to establish a bond based on trust and support, allowing them to feel more confident in their self-expression.

Furthermore, movement is essential – it facilitates the circulation of cerebrospinal fluid, which in turn affects perfusion in the brain and activates other neuroprotective factors (Feinberg & Mark, 1987). It also promotes bone growth (Gilsanz et al., 2006). Additionally, a dynamic dance and movement routine may help babies learning to walk because it serves as a form of movement practice, allowing them to gain greater stability and balance. In relation to movement practice and increasing one’s movement repertoire, Doherty refers to the purported role of mirror neurons in our motor system. Mirror neurons are neurons that fire both when an individual acts and when observing the action of another (Iacoboni et al, 2005). Research has suggested a role for mirror neurons in imitation, understanding the actions of others, Theory of Mind skills and even language development. For example, Iacoboni and colleagues conducted a study using functional magnetic resonance imaging (fMRI) to investigate functional mechanisms underlying our ability to understand the intentions of others. When participants were tasked with determining the intentions of an actor in a context-rich situation, there was a significant increase in activity in areas of the brain typically active during the execution and observation of an action. These brain areas included the posterior part of the inferior frontal gyrus and the adjacent sector of the ventral premotor cortex, referred to as premotor mirror neuron areas. One might argue that the engagement in and observation of movement by a baby engaged in an interactive dance, would not only lead to activation of these brain areas but could also facilitate the understanding of intentionality. In other words, interactive dance, along with other, similar forms of movement experience may facilitate both motor development and the cultivation of our sociocognitive abilities.

In another relevant fMRI study it was found that in seven-month old babies in the process of acquiring language, those with the most abundant grey and white matter in the cerebellum and the hippocampus demonstrated better language ability at age one (Can et al., 2013). Interesting, these same brain areas are implicated in motor ability and memory consolidation, respectively. When learning to speak, complex movements need to be coordinated and we need to remember words and grammar. This is why at around six to twelve months of age, babies increasingly direct their gaze on the speaker’s mouth, not eyes. Doherty suggests that holding your baby closely and dancing or moving with them, particularly in poses such as, “Over the Heart Embrace”, which is good for eye contact and close scanning of the face, allows them to focus their attention on your mouth and facial muscles and imitate those actions.

Another key aspect of interactive dance is music and rhythm. The first rhythm we are exposed to is our mother’s heartbeat. In fact, a baby synchronizes its own pulse and breathing rate with its mother’s heartbeat while in utero (Ivanov et al., 2009). After birth, it seems that we continue to seek rhythmicity in our lives, as music is ubiquitous across cultures and throughout history. Historically, music has been used for healing and promoting wellness. Music’s healing properties were celebrated as far back as the 6thCentury, with the mathematician and philosopher Pythagorus prescribing music as medicine, claiming that the laws of harmony inherent in music could be harnessed to restore harmony to the human mind, body and soul. More recently, research has highlighted the importance of music listening for older adults  in promoting quality of life and managing psychological distress (Miranda & Gaudreau, 2010; Saarikallio, 2011). For babies, the musical component of interactive movement and dance routines provides them with stimulating rhythm and enveloping personal touch that may have a profound effect on their development.

For example, in an fMRI study investigating the way emotional music is processed in the brain, researchers found that when participants listened to emotional music with eyes closed there was significant activation of the amygdale and co-activation of the locus ceruleus (LC) and the ventral prefrontal cortex (VPFC), two areas in the brain with dense connections to the amygdala that are also involved in valuation of emotional stimuli. Based on these and other findings, Doherty argues that music has the potential to increase the emotional bond between you and your baby, as not only does emotional music lead to activation of the limbic system but also portions of the frontal lobe (VPFC) implicated in emotion regulation and processing (Lerner et al., 2009).

In her writing, Doherty continually pushes the reader to address their child’s developmental needs holistically. She emphasizes the interconnectedness of various systems and functions in the body. For parents or caregivers of special needs children Doherty highlights research demonstrating that dynamic forms of interaction are essential for motor, cognitive, and social-emotional development. Doherty provides practical tips and guidance on how to engage in dance routines with preterm babies, babies with hearing and visual impairments, infantile epilepsy, autism, and Down syndrome.

Sympathetic to the stressful moments experienced in early parenthood, Doherty discusses the role of a dance and movement routine in relieving stress for both caregivers as well as babies.  Doherty argues that excessive caregiver stress can affect your baby’s ability to form a proper attachment; as a result baby-caregiver relationship may suffer. A study by Meaney and colleagues (2006) observed significantly lower licking and grooming behaviors in rat mothers who experienced greater gestational stress. In turn, their offspring demonstrated increased levels of behavioral anxiety, were more fearful and sensitive to stress. Doherty reviews evidence which suggests that exercise can increases positive affect and reduce stress, and she highlights certain movements such as the “Up in the Sky Hold” and the “Fly Like a Bird Hold” that are particularly stimulating and exciting for your baby and act as good strengthening exercises for your arms and upper body.

Doherty’s review of the scientific literature is infused with countless practical tips on how to incorporate dynamic dance and movement routines into daily life and how to make adjustments that fit the needs of you and your child. Doherty avidly engaged in these dance and movement activities with her young children and she displays a pragmatic attitude towards the different challenges and joys experienced by primary caregivers incorporating these activities into daily life. She provides readers with numerous illustrations of each pose or carriage and guidelines on how it can be modified to be more comfortable for the caregiver and baby. She suggests that caregivers start with a warm-up of Tai Chi poses to stimulate their muscles before moving on to more rigorous moves, which combine aerobic and strengthening exercises. Overall, Doherty uses language that is accessible, colorful and rich with imagery. The research and movement techniques discussed are grounded in many years of hands-on experience and diligent research, providing readers with a rich scientific, cultural, historical and practical perspective on child care and human development. This book is a must-read for any parent, caregiver or soon-to-be parent interested in learning about the incredibly dynamic, rewarding, stimulating techniques for bonding with their baby that Doherty advocates. The book will also be of interest to psychologists, sociologists, anthropologists and educationalists interested in dancing toward greater insight and understanding of human development.

Originally published Sep 10, 2014 in ‘In One Lifespan’ @ PsychologyToday.com