Thanks to advances in health science and technology, we are living longer. As we get older, there is an increasing risk of developing some form of dementia such as Alzheimer’s disease (AD).  The incidence of dementia in North America is projected to nearly triple from approximately 40 million cases at present to more than 115 million cases by 2050 (Alzheimer’s Disease International, 2009). Considering there is no known cure for AD and minimal benefits from medication, behavioral interventions, such as physical exercise, may be critical for extending quality of life and possibly slowing decline or preventing onset.
The importance of regular exercise has drawn national attention in the USA, so much so that the National Institute on Aging in collaboration with the White House Conference on Aging have developed a campaign called “Go4Life” to help encourage older adults to get active (NIA, 2015).  It is recommended that adults get 150 minutes of moderate-intensity aerobic physical activity a week plus muscle-strengthening activities 2 or more days per week. However, despite the well-known benefits of exercise and the consistent health advice and encouragement to engage in regular physical activity, less than 30% of American adults meet the 2008 federal physical activity guidelines (CDC, 2014) and fewer than 7% of those over 70 meet the American College of Sports Medicine Guidelines (Gorden-Larsen, 2004).  Similarly, only 41% of Irish adults take part in regular physical activity (Department of Health and Children, 2009).
How do we encourage older adults to exercise, and what type of exercise is best? Exergames may provide a good solution.  Exergames are interactive games that combine physical and mental activity, and research suggests that Exergames may increase motivation to exercise while making exercise more enjoyable, while also providing added cognitive benefits when compared to physical activity alone (Anderson-Hanley et al., 2012; Maillot, Perrot, & Hartley, 2012; Read & Shortell, 2011). 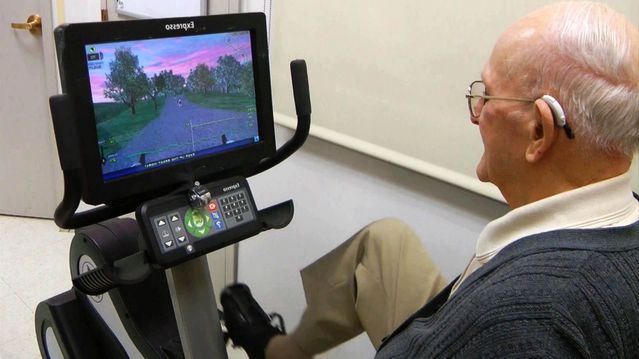 Source: Cay Anderson Hanley/Used with Permission
Notably, recent research suggests that integrating cognitive challenges and physical exercise may have a greater chance of ameliorating cognitive decline than stand-alone physical or cognitive exercise.  In one study, older adults who pedaled along an interactive virtual bike tour demonstrated significantly better cognitive performance after three months of exercise compared to a comparison group of older adults who pedaled traditional stationary bikes (Anderson-Hanley et al., 2012).  In another recent study, individuals who engaged in simultaneous working memory and cardiovascular training showed greater improvement on a learning task when compared with those who engaged in memory training only (Theill et al., 2013).
We wanted to examine the effects of increasing the mental challenge while engaging in aerobic exercise.  In our study, we placed virtual-reality enhanced stationary bikes into several retirement communities.  Sixty-four older adults volunteered to participate and they were randomly assigned to one of two groups: (1) a low cognitive challenge group, where participants pedaled the bike while navigating along a virtual bike tour; or (2) a high cognitive challenge group, where participants pedaled through a videogame course in which they scored points by chasing coins and dragons.
We assessed participant’s cognitive performance on tests of executive function prior to exercise and after a 20-minute bout of moderate intensity aerobic exercise. After the initial session of exercise and cognitive testing, participants were invited to exercise in their assigned group three to five times per week for 30-45 minutes.  Participants’ cognitive performance was again assessed after three months of exercise.
Three different measures were used to assess executive function in this study.  The first test that we used was the Stroop Test (van der Elst et al., 2006), in which participants are first asked to name colors of squares on a page, then asked to read a series of words printed in black ink, and finally asked to name the color of ink of an incongruent, or different, printed word (for example when the word “red” is printed in blue ink instead of red ink, the individual is instructed to say “blue”).  This test provides a measure of inhibitory control, or the degree to which one can inhibit reading the word when asked to name the ink color.  The second measure of executive function that we used was Color Trails (D’Elia et al., 1996).  In Color Trails 1, participants are asked to connect numbered circles in ascending order. In Color Trails 2, individuals are asked to connect numbered circles in consecutive order while also alternating the color of the circle.  This provides a measure of cognitive flexibility, or ability to switch between different mental sets. Finally, participants completed the Digit Span task (Strauss, Sherman, & Spreen, 2006) during which participants first repeated a series of numbers in order, followed by repeating a series of numbers in reverse order. This provides a measure of working memory ability, or the ability to hold information in memory while performing some mental operation on the information.
Overall, we found that interactive mental and physical exercise resulted in improved cognitive performance, similar to findings of other trials of exergaming (Anderson-Hanley et al., 2012; Maillot et al., 2012; Oswald et al., 2006; Shatil, 2013).  We observed significantly more improvements to executive function in participants who were in the high cognitive challenge group (pedaling through a videogame) compared to those in the low cognitive challenge group (pedaling along a virtual bike tour).  These benefits were seen after a 20-minute exercise bout and also after three months of exercising.
Overall, the results of our study indicated that higher doses of interactive mental challenge with aerobic exercise increased cognitive benefit for older adults.  While much of the research points to cardiovascular health as a major factor influencing brain health (Colcombe et al., 2006), there may be a variety of unique biological mechanisms linking exercise with enhanced cognitive functioning (Angevaren et al., 2008; Colcombe & Kramer, 2003; Maillot et al., 2012).  It is also possible that there are different underlying mechanisms responsible for the neurocognitive benefit of short-term vs. long-term interactive exercise and high vs. low cognitive demand. Although it is still unclear which aspects of training produce the greatest cognitive benefit, the present study highlights the importance of engaging both your body and your mind in interactive activities for maximum benefit.
So, let’s use this as motivation to “move it and use it” as we continue our quest for healthy aging!
Current study:

Originally posted on Jan 05, 2016 in ‘In One Lifespan’ @ PsychologyToday.com

Some links contained within this post may be external